The Agents ( formerly " Cobra" ) were one of Continental's busier bands circa 1979-1981.  This original lineup from left to right includes Dan Unger-guitar, Chris Quattrocchi-drums, Janie Naegeli-vocals, and Roger Moore-bass.   This band was once vehemently chastised during a break by an Illinois club owner for putting a drum solo in the Led Zeppelin song, " Moby Dick ", not realizing that was how it was recorded.  He didn't want his thirsty, dancing patrons stopping to watch the drummer.  He made a fool of himself, but was still upset. That was a cringe-worthy gig on any band's schedule - Captain Jack's, Litchfield, IL, 11:00 - 3:00 a.m. and you had to play both Friday AND Saturday nights!  There was always a guy there that would check your musicians union card to see if your dues were paid up.  Some of the real glory of being a professional musician. 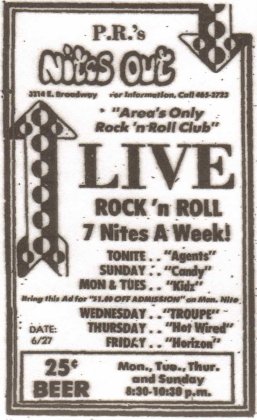