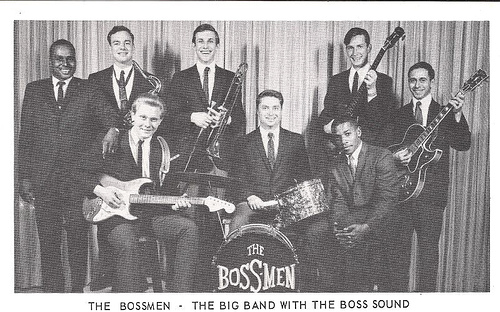 I got the following great retrospective from Steve Tripp on June 13, 2010:

The Bossmen was a traditional, big, Rhythm and Blues band (very much like the band depicted in the Blues Brothers movie), with choreography for the musicians, choreography and acrobatics (believe it or not ! ! !) by the vocalists, lots of theatrics, great fanfares, and lots of audience participation.

The picture you have posted was actually a pre-addressed postcard that we had printed up so people could use it to book the band.

The man on the extreme right is Gene Gambel, the first rhythm guitar player in the band, who was with the band for around 4 years. He left the band to develop a career with the Aeronautical Chart Center, here in St. Louis.

I am the tall guy next to him.

Seated in front of me is Freddie Wilson, an excellent vocalist, in spite of the fact that he was only about 16 in the photo. (He joined the band about 2 years before the picture was made, and I was given quite EXPLICIT instructions to keep him OUT OF TROUBLE by his mother. I did my best.) He eventually became a preacher in one of the larger Baptist churches in the St. Louis area.

Jimmy Claypool indeed was one of our vocalists, but unfortunately is not in this picture.

The drummer is Dick (Latch) Gundlach. He was the original drummer with the band, and left after about 5 years.

The sax player in the photo is Tom Bauer, though the other sax players mentioned did play with the band later on.

Freddie Wilson was also a really good keyboard player, and when he left, he was replaced by Dale Kolessa (not positive about the spelling).

Most of us were putting ourselves through college at the time, and as we graduated (or were drafted and sent to Viet Nam) we were replaced.

We were friends with, and went to college with some of the guys in the "Fabulous Leather-Suited DelRays." Both bands made demo tapes in the basement studio of Nick Charles (Nicholas Pukus), and we all became pretty good friends. We also played together now and then, the most memorable being a series of jobs we played for Danny Thomas, raising money for St Jude's Childrens Hospital. The jobs culminated at a concert we played together at Kiel Auditorium, along with Bob Kuban's band, Chuck Berry, and Charlie Rich.

As the Bossmen evolved through additions and deletions of members, Bill Ulkus eventually went with the guys in the DelRays to create an excellent band called the Guild. Ulkus is standing in the center of the first picture of the Guild you have posted, and on the far right in the second picture on their site.

Again, as the Bossmen evolved, I left that band and helped form the band called DNA. (I'm the tall guy in the second picture of DNA posted on your site.) After the tradition of the Bossmen, DNA did the whole act, including choreographed steps, etc.