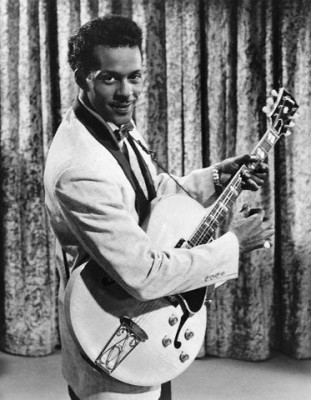 Born in St. Louis, Missouri, October 18, 1926,   Chuck Berry was the fourth child in a family of six. Chuck Berry grew up in the north St. Louis neighborhood known as "The Ville", an area where many middle class St. Louis blacks lived at the time. His father was a contractor and a deacon of a nearby Baptist church, and his mother a qualified principal. In 1944, before he could graduate, Chuck Berry was arrested and convicted of armed robbery after taking a joy ride with his friends to Kansas City, Missouri. Berry attempted to commandeer a man's car at gunpoint with a non-functional pistol. Berry was released 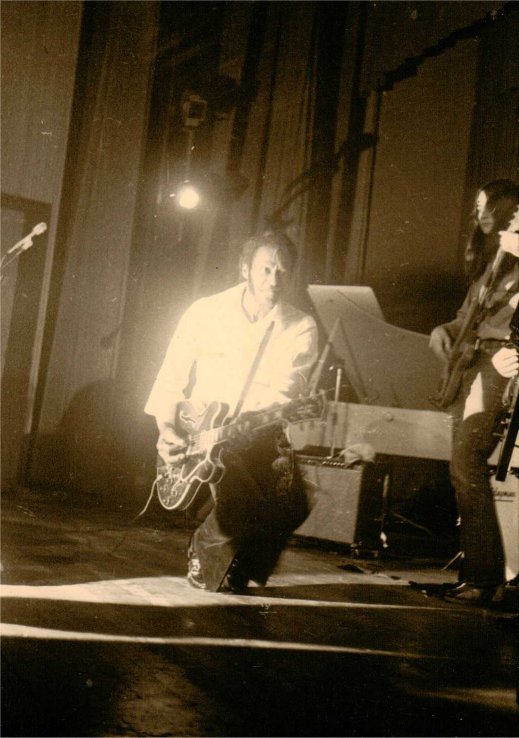 from the Intermediate Reformatory for Young Men at Algoa, near Jefferson City, Missouri on his 21st birthday in 1947. After his release from prison, Berry married Themetta "Toddy" Suggs on October 28, 1948 and pursued a number of jobs in St. Louis, including being a hairdresser. Chuck Berry began moonlighting as a guitarist for various bands in St. Louis as an extra source of income. 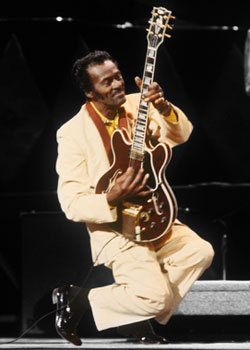 It was in 1953 that Chuck Berry joined the Sir John's Trio (eventually renamed the Chuck Berry Combo), which played the popular Cosmopolitan Club in St. Louis. Country-western music was big at the time, so Berry decided to use some of the riffs and create his own unique hillbilly sound.

Later in 1955, Berry went on a road trip to Chicago, where he chanced upon a club where his idol, Muddy Waters, was performing. He arrived late and only heard the last song, but when it was over he got the attention of Waters and asked him who to see about making a record. Waters replied, "Yeah, Leonard Chess. Yeah, Chess Records over on Forty-seventh and Cottage." Berry went there on Monday and discovered it was a blues label where greats like Howlin' Wolf and Bo Diddley recorded.

He didn't have any tapes to show, but Chess was willing to listen if he brought some back from St. Louis. So Berry went home and recorded some originals, including the would-be "Maybellene," then called "Ida May," and drove back to Chicago later that week to audition. Much to Berry's surprise, it was that hillbilly number that caught Chess' attention. Berry was signed to Chess Records and in the summer of 1955, "Maybellene" reached #5 on the Pop Charts and #1 on the R&B Charts. Through Chuck Berry, Chess Records moved from the R&B genre into the mainstream and Berry himself was on his way to stardom. 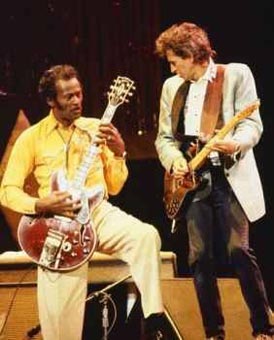 Berry continued his success with such hits as "Brown-Eyed Man," "Too Much Monkey Business," "Memphis," "Roll Over, Beethoven!" and "Johnny B. Goode." "Johnny B. Goode" is Berry's masterpiece, as it brought together all the elements of Berry's unique musical sound. It cemented his place in rock history and led to fame in the 1950s. His popularity garnered him television and movie appearances and he toured frequently.

In the 1960s and 1970s, Berry's music was the inspiration for such groups as the Beatles and the Rolling Stones. Berry had a number of comeback recordings and in 1972 had the first and only #1 Pop Chart hit of his career with "My Ding-A-Ling. 1986 fittingly saw him inducted into the Rock and Roll Hall of Fame as the very first inductee in history. As a tribute to his pervasiveness in the realm of rock, a clip of "Johnny B. Goode" was chosen played in the Voyager I spacecraft, proving Chuck Berry and his rock legacy are truly out of this world. 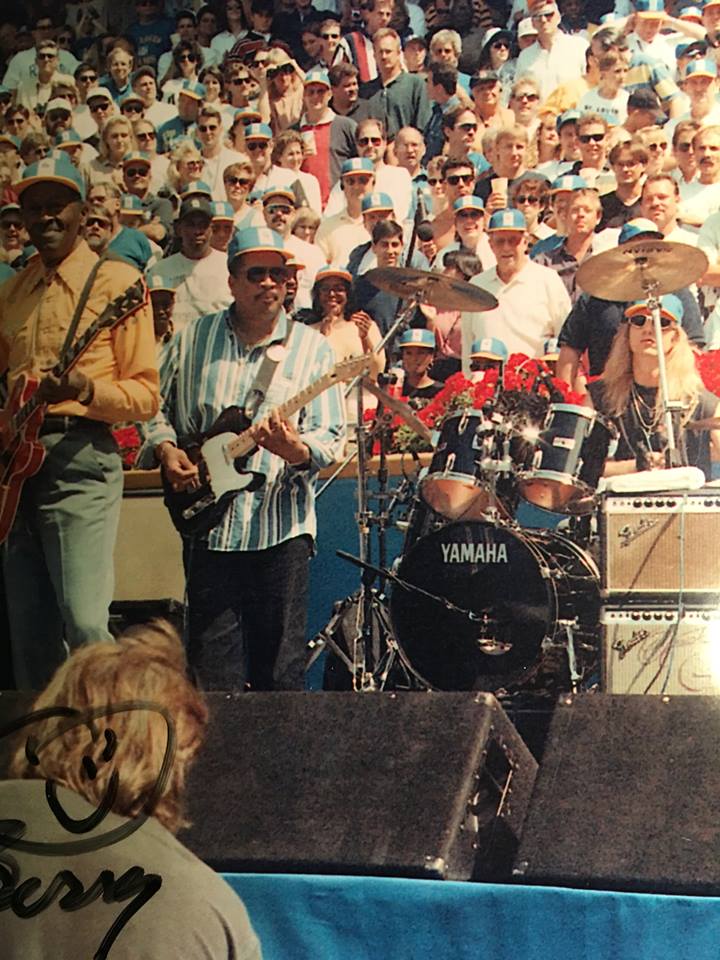 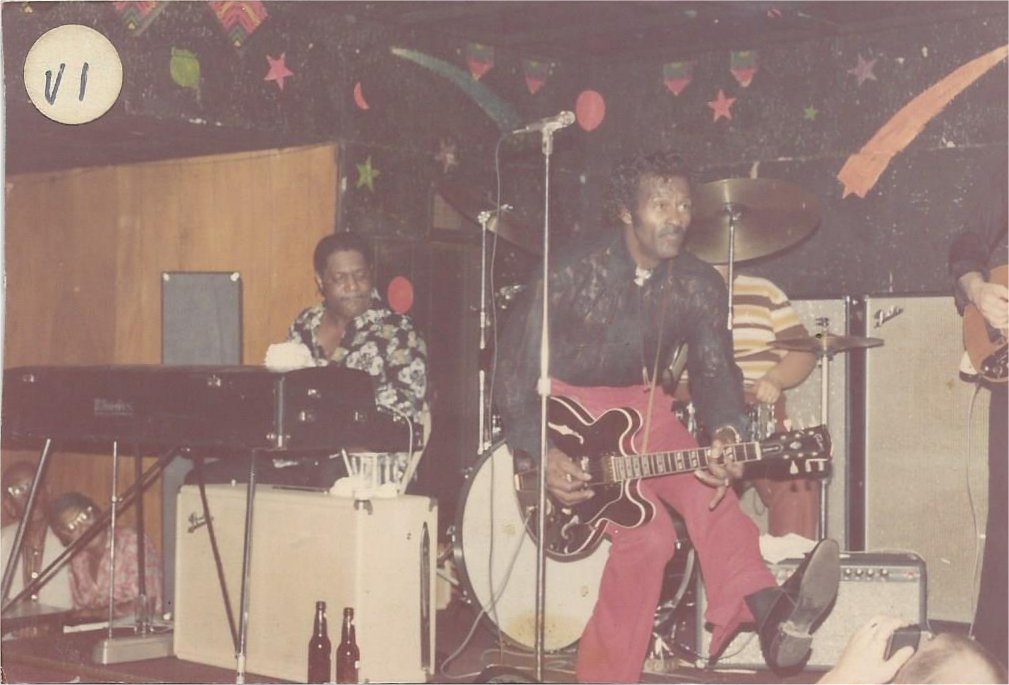 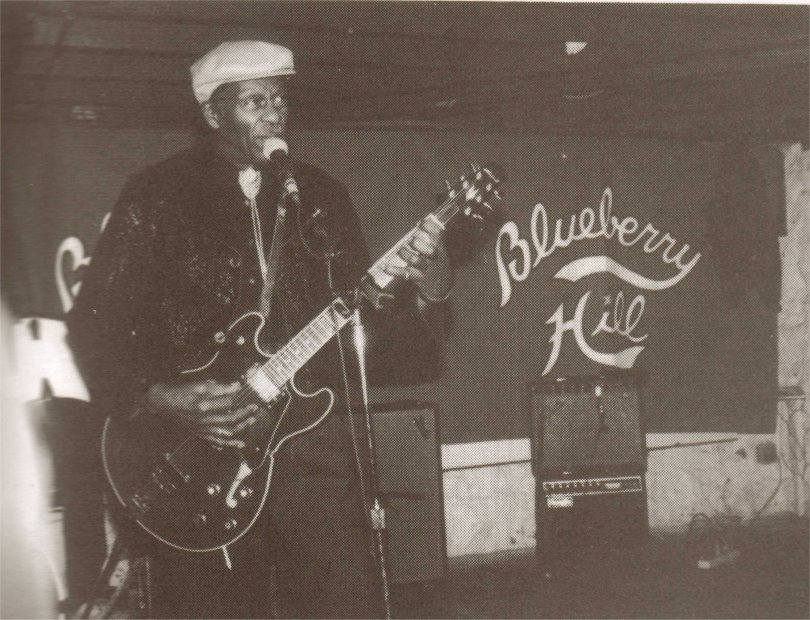 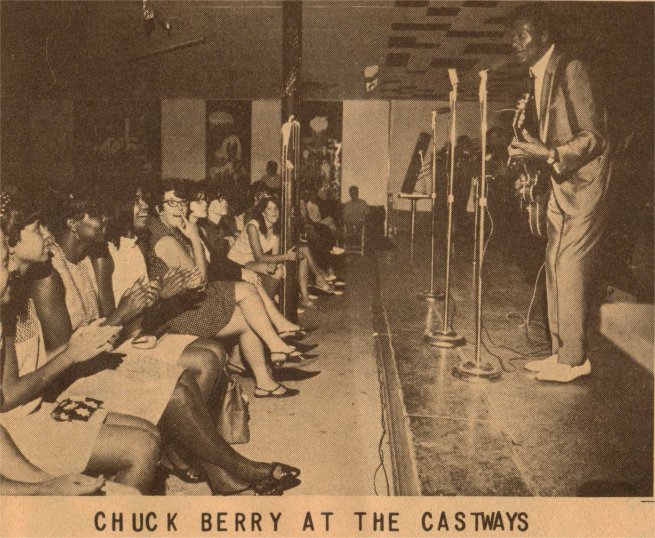 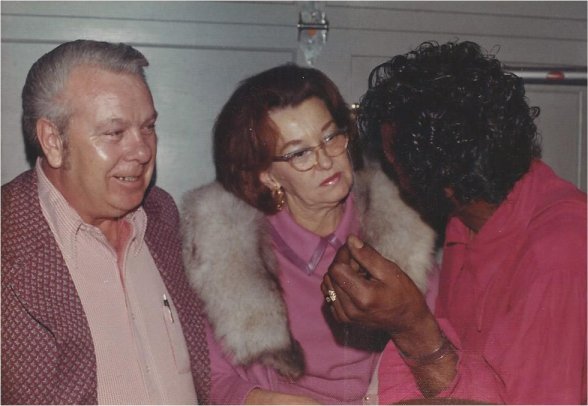 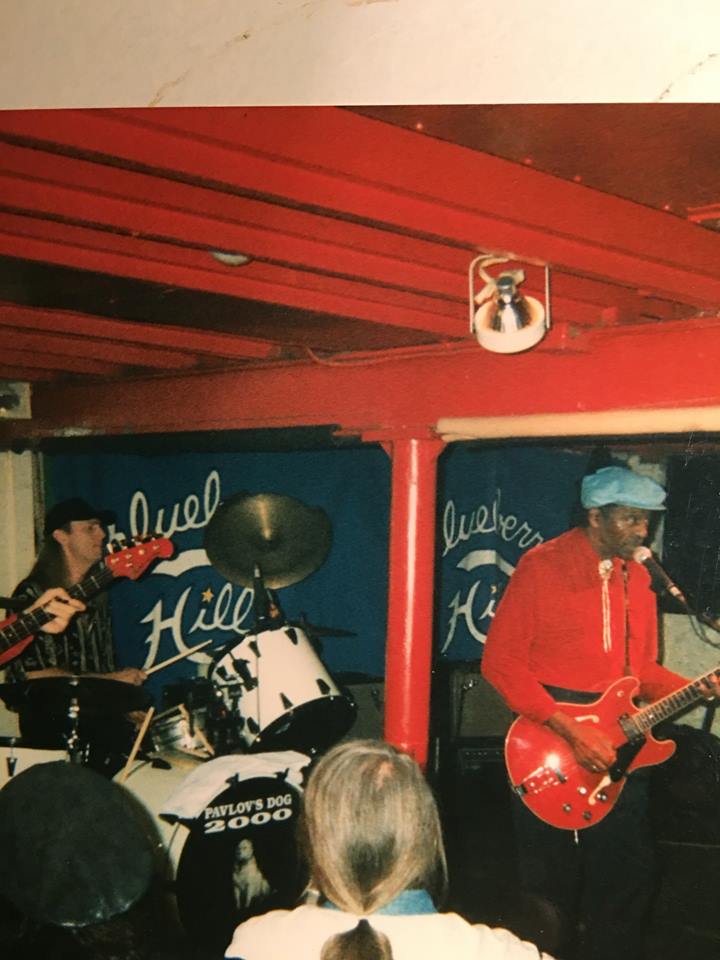 Here's a memory from Bill Powell:

Greg, after Chuck Berry “left the building”, I ran across your site as I was trying to reconstruct my Chuck Berry memories from the late 1950’s when I lived in south St. Louis (Bevo Mill). By then I had a transistor radio that I put under my pillow and listened to after my Mom tucked me in. I was bored with pop music on KXOK and soon discovered the real deal on KATZ and KXLK (Dave Dixon, Spider Burks & Brother Gabriel). I stayed up late for the Gospel too. My Chuck Berry memories are of “live broadcasts” that he did from a club. (not to mention others I heard from from “Slick’s Lakeside Club”)  My “live broadcast” research led me to the Cosmopolitan Club in 1959-ish that makes sense on my timeline. But, I was wondering if he did any other “live broadcasts” in those early days?  As an enterprising, all-American boy on a bicycle, I found the local juke box distributor (on south Gravois) where I invested lunch money in a collection of well-used juke box R&B records at $.10 each. . . for sure I knew what artists and labels to look for thanks to Brother Gabriel who, I have learned, had a record store. Well there’s my Chuck Berry memory.  “So much music, so little time.” Bill “spider” Powell, Kansas City 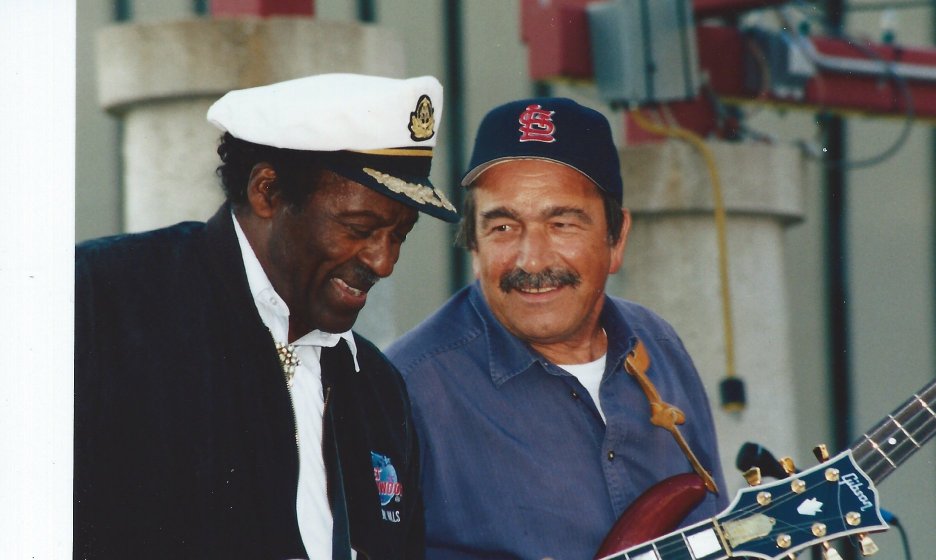 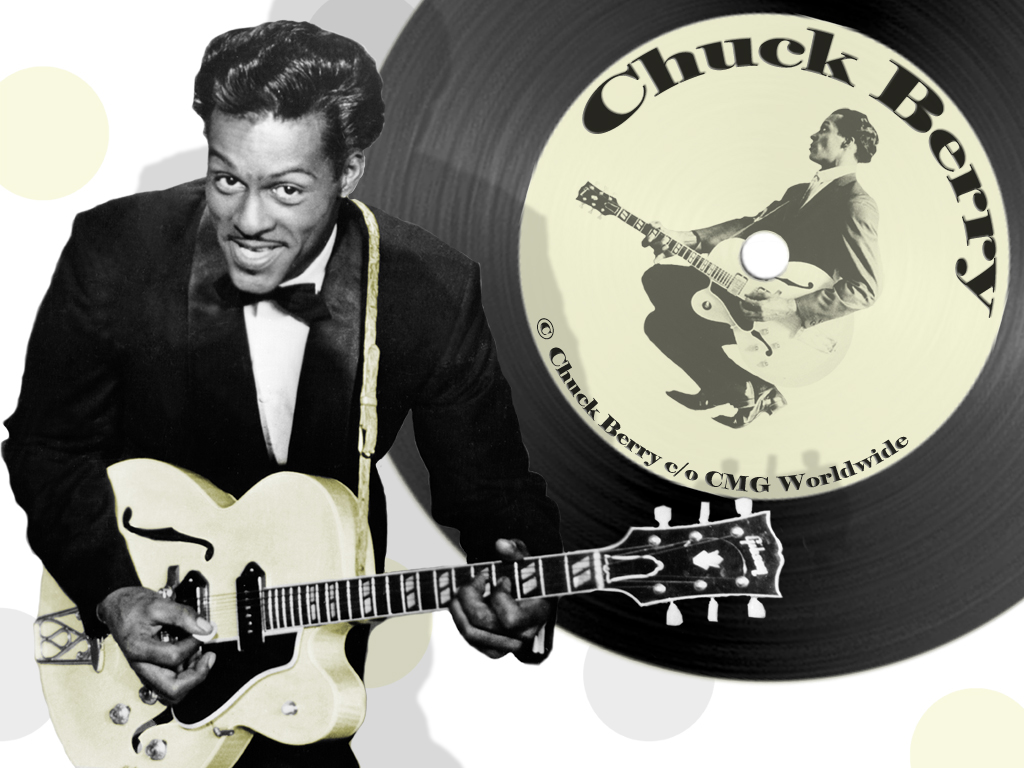 Here's Chuck on his 60th Birthday at The Fox: 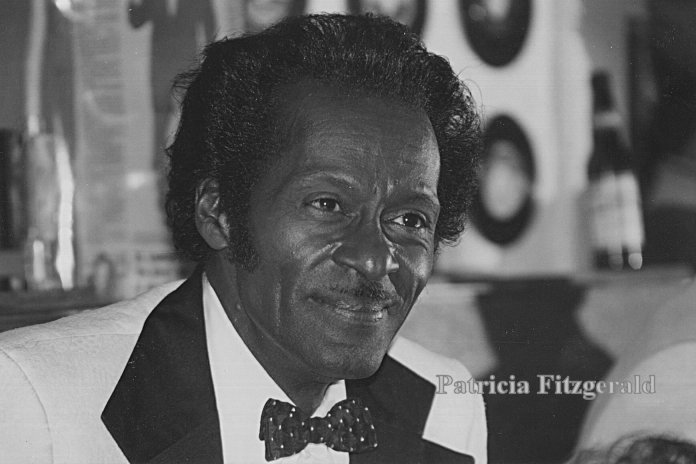 Chuck at The Benld Coliseum 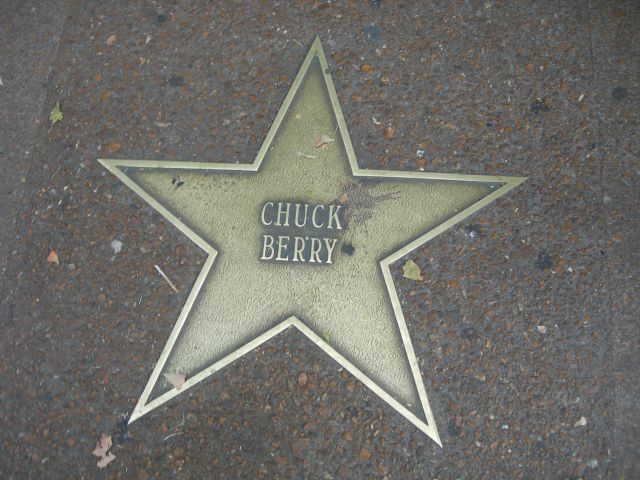 Most info and photos from Chuckberry.com and St. Louis Memories Also Thanks to Greg Edick , Ed Beck and