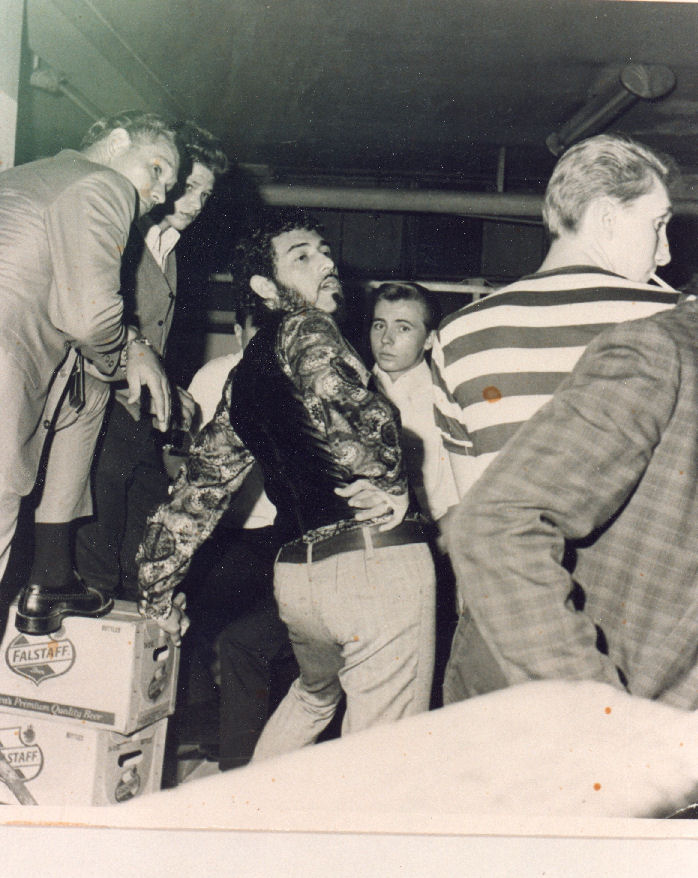 Ernie Cummings far left, son Steve next to him with Sam the Sham at the Batcave.

Here is a chapter of Ernie's book about his time as an Agent/Promoter:

When Johnny Rabbitt announced an event on his radio show, we always had wall-to-wall fans show up. When he would say he was going to be at a downtown St. Louis department store at a particular time, it was inundated with teenagers. He was that popular. He would broadcast his show from there and give out records. I was there also because he had an imaginary alter ego on the air that no one ever saw, Bruno J. Grunion, plus me. He always referred to me as "Uncle Ern."
In the 1960s when groups had a hit record, I made sure I booked them into the St. Louis area. I remember booking The Righteous Brothers into the Starlight Ballroom, a very popular place, with my son's band onstage. The girl singer with Steve's band was Gayle McCormick. That had to be one of her many career highlights — to be on stage with Bill Medley and Bobby Hatfield. Gayle had a million-seller hit record during that time, "Baby It's You," which was produced by me.
Speaking of Bill Medley, who's still going strong, Paul Revere and the Raiders come to mind because he performed with the Raiders. I once booked the Raiders at venues around St. Louis and Alton, Illinois. I arranged a night my daughter Susan will never forget: I let her go in the limo to the "gig" with Paul Revere and the Raiders. She was 16 years old at the time.
One day when Sam the Sham (of the Pharaohs) was with me, he noticed that I did not have the same hand pattern as everyone else. He was so impressed, he flew me to New York to meet his palm reader, who had never seen a palm like mine. In fact, no one has ever seen a palm like mine. I have no "M's" in the palms of my hands ("M"-shaped diagonal lines). I have checked many hands all over the world, from my Navy days through today. Everyone has an "M" in their palms except me. My line goes straight across. Look at your hand and you will see the "M."

If anyone has more info or photos of Ernie, please send them to greg@dejawho.com