House Band at Burnham's and then Muddy Waters 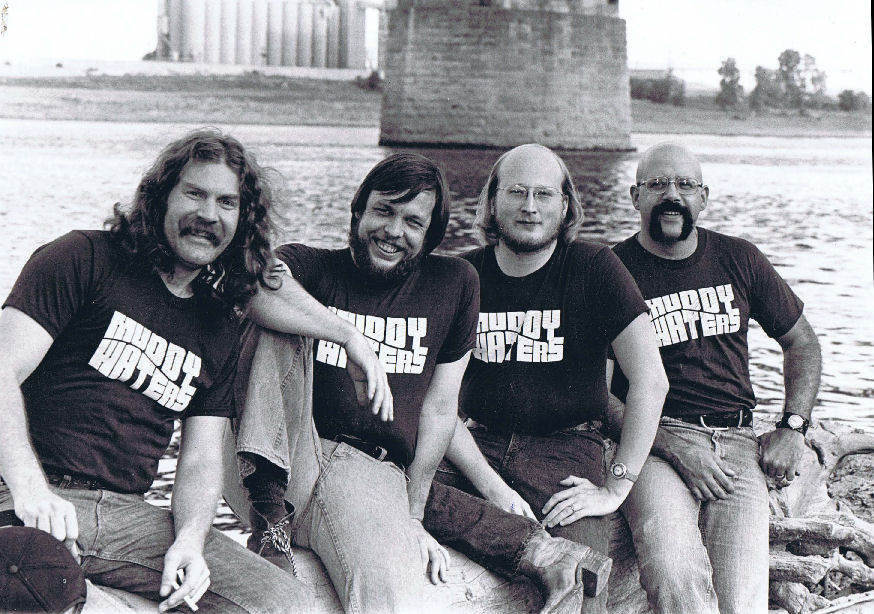 I got this wonderful recollection from Dichotomy fan Chuck Benson on 11/20/10:

I first saw them in the summer of 1971 in a bar called the Grog Shop in the basement of Stouffer’s Riverfront Inn, which is/was the circular tower across from Busch Stadium.  I think it was ’71 (could have been ’72), but I know it was summer because a friend of mine, who now has some notoriety in St. Louis so he’ll stay nameless, thought it would be fun to throw the peanut shells that littered the floor at the sunburned back of a girl at a nearby table.  The band thought it was funny, her boyfriend did not.  I think we left early. 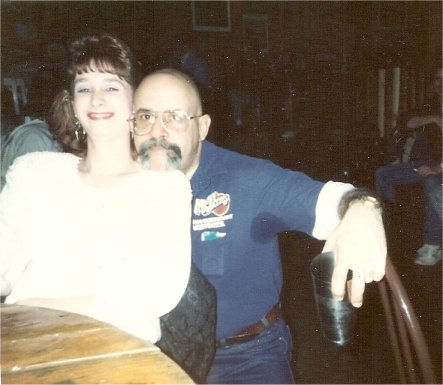 Anyway, the band was made up of two guys, one obviously a business type guy, and the other long haired, bearded, flannel shirts—not a hippy, but fairly scruffy.  Thus, the name Dichotomy.  They played mostly rock and roll cover songs from the 60’s.  At that time, oldies went back only 10-15 years, which we, being in our early 20’s, thought was a lifetime.  But, it was very popular and not played all that often.  KADI-FM started an oldies show on Sunday nights in the mid 70’s, and it was the only one.  So, Dichotomy was on the money as far as the music they played.  Plus, they had a pretty well defined sense of humor that the crowd loved.

Then, they kind of disappeared for a while, at least for me.  Without cell phones, text, and the internet, news about bar bands traveled relatively slowly then.  But, sometime in ’72 they showed up at a Ground Round restaurant, which my wife says was in Clayton, so it must have been.  This was another beer and peanut shell kind of place that played (not so) old Ali Frazier fights on the walls at lunchtime.  Same music, same schtick.

After Westport Plaza was developed, Dichotomy started to play in what was then Burnham’s St. Louis Opera house—had to be sometime in ’73.  Then, the Opera House was one big room, with the bar on the right as you walked in, booths around the walls and tables in the middle.  The capacity was a lot bigger than what they played to before.  (Burnham’s later became just the Opera House when Burnham gained some fame for killing some guy in a parking lot someplace.   He went away for a while.  Too bad--seemed like a pretty good guy.) Here I will insert a note I got from someone blaming me for this post:

Greg, that "some guy" was a son, a brother and a love that "nice guy" Tom Burnham shot 4 times in the back with a .45. Tom Burnham was hitting hard on the wife of "some guy's" best friend, and when asked to stop he killed the love of my life in cold blood. His name was Scott Humphries. 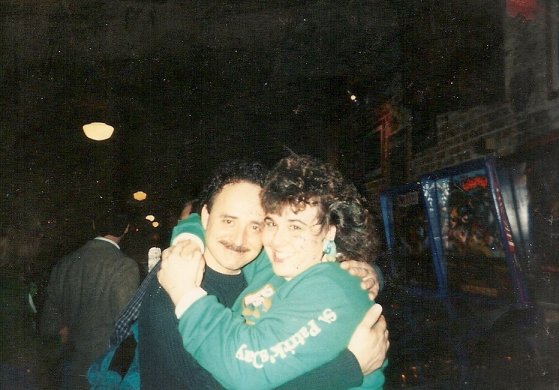 I may be wrong about this, but I think it was there that they grew to 3 members, with the third being the little bald guy with spectacles.  The music was pretty much the same, but the humor became a lot rowdier and raunchier.  People couldn’t get enough of these guys, and I probably spent what could have been a healthy contribution to a 401k in that place.  They would take collections from the crowd and pay whatever they got to anybody who would streak the place, which was big then.  It got up to $100 one night and I was tempted.  My wife to be didn’t see the benefit, so I didn’t.  You could drive to California and back on $100 then.

This went on through 1975 and into 1976, after which they moved to Muddy Waters in the new Laclede’s Landing development.  I remember being told that one of the band members had an interest in the place, which I think was nominally a restaurant.  By now, they were four members, and I think sometime five.  The business guy (for the life of me, I can’t remember their first names) was long past the suits—he may have been the one with a piece of the action.

This was the point when Dichotomy went from being a really good bar band to a local institution.  The music quickly changed from rock and roll covers, to mostly bluegrass kind of stuff, although they still threw in some of the oldies.  If you’ve seen the list of songs on their album, then that’s pretty much what the set list would look like.  As it was at Burnham’s, you had to get a table an hour or more before they started, or you’d be standing in a shoulder to shoulder crowd.  They gave new meaning to rowdy and raunchy.  Their humor was quick and wicked.  Any female under the age of 50 (or guys, or that matter) who walked by the stage (and it was near the front of the room so it was hard to avoid) was in for complete humiliation.  Amidst of all the raucous noise, was some very good music.  I mean, they could really play. 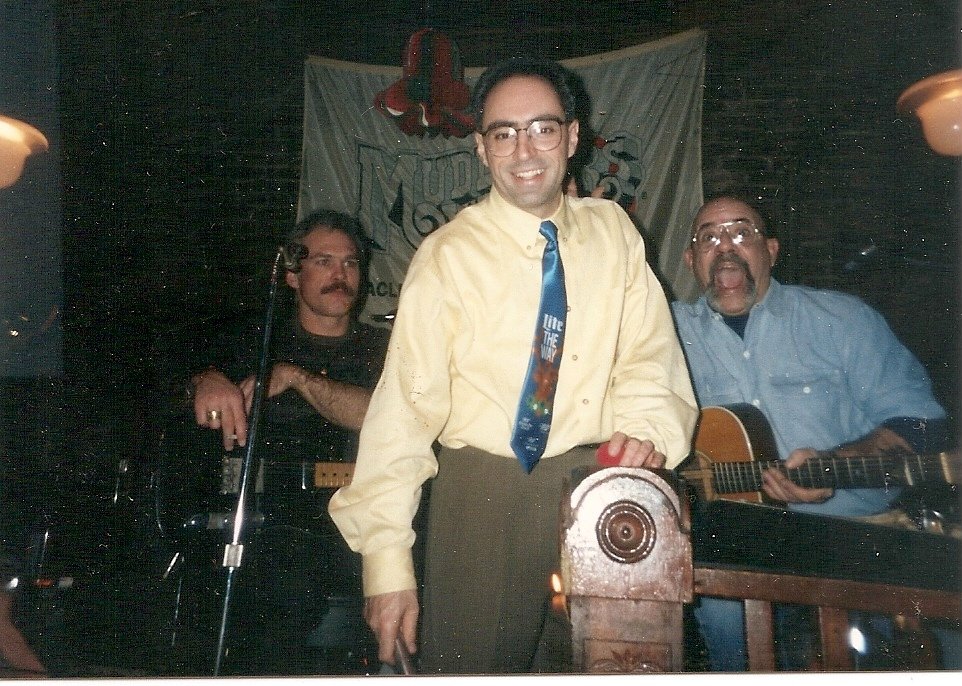 ...and here is a funny memory from Denny Kreps, Banjo Player:

Muddy Waters became the biggest beer stop in the city of St. Louis other than Busch Stadium. One St. Patrick's Day when the band was playing there were close to 17,000 people through the door.  To give you and idea of our sense of humor, although we played at M.W. regularly, when we went back to play at Burnham's 10th Anniversary party. There were two scandals that had hit Burnhams...one was the shooting behind his new restaurant-T. Billy Moffit's, and the other was a couple who got salmonella from eating there. When we played, we wore bullet proof vests and T shirts that read "If the food doesn't kill you, the owner will!" The original group-Bill, Denny, Lee and Rick played once a year at the Duck Room at Blueberry Hill up until a couple of years ago. Now we're on the couch. 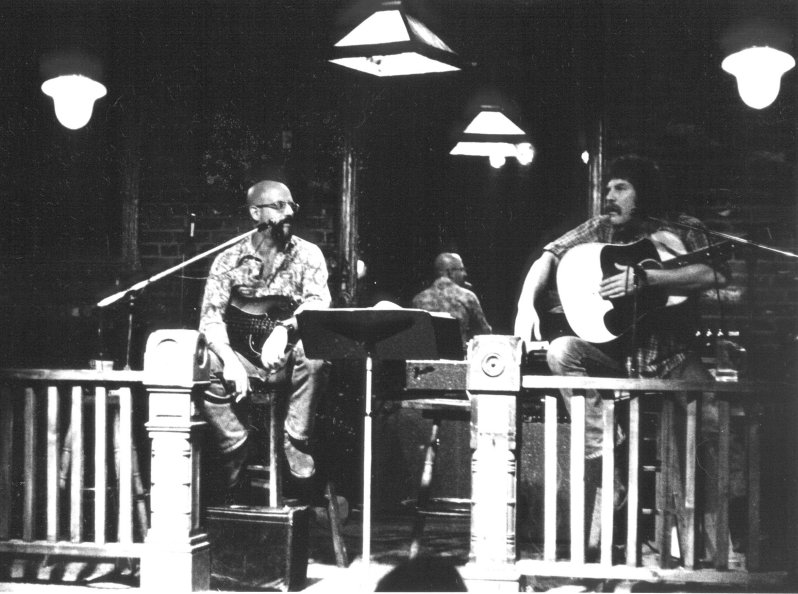 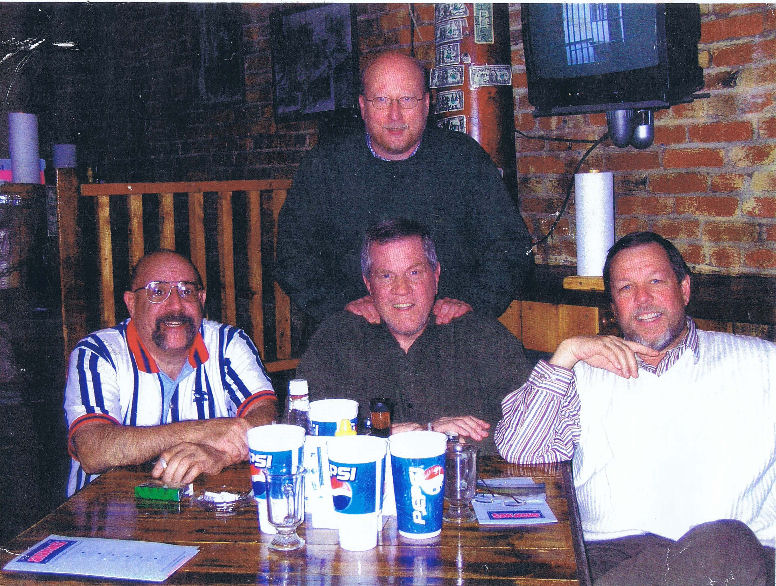 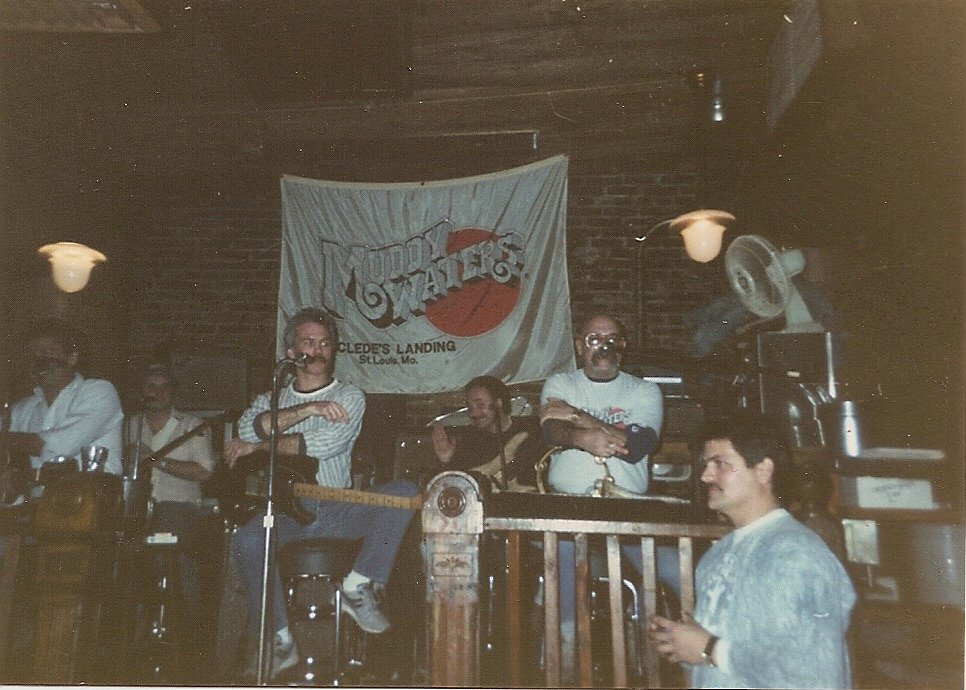 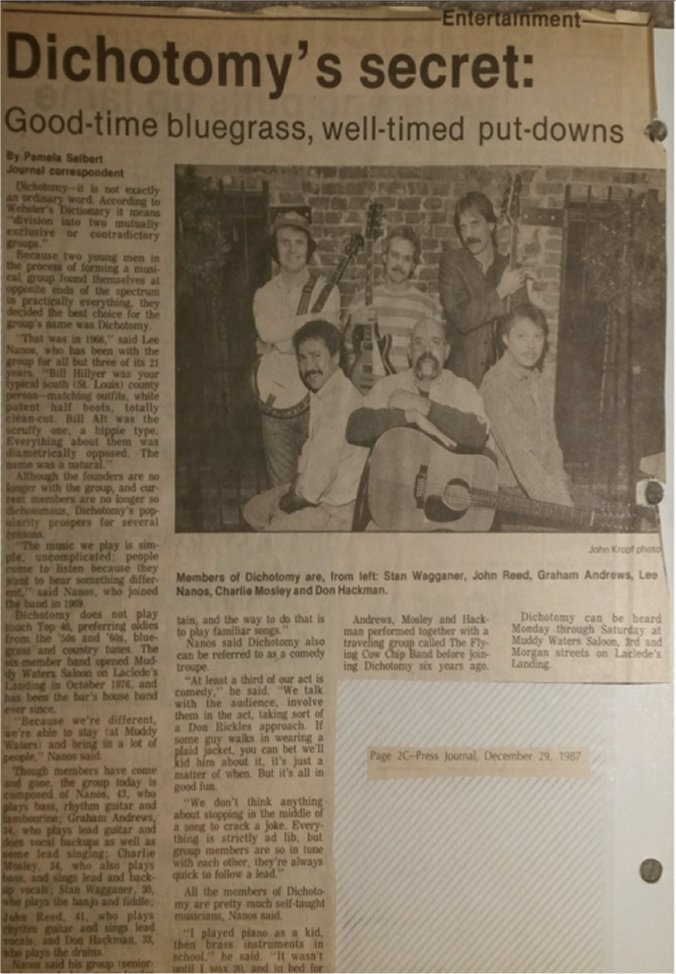 ...and one from Scott Buettmann:

My name is Scott, I used to be good friends with muddy waters employee VINCE SCOTINO. He was a busboy from 79' to 85' and a bartender from 85' till Muddy's closed. He used to sneak me in when we were in high school together. Many nights after the bar closed,  there would be ten of us, employees and sometimes Lee and Denny, we would go out back to drink and pitch quarters for cash in the parking garage till daylight. Fun times indeed

Thanks to Josephine Anderson for "live" photos!