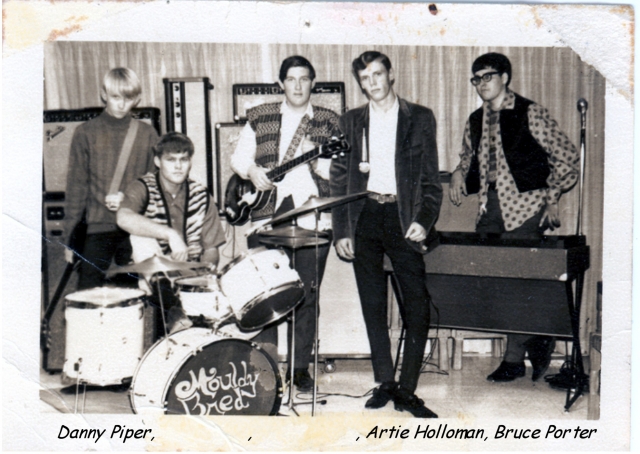 The Vibrations began in the summer of 1964, just before we all started high school, when Artie Holleman and Danny Piper began to play guitar together. There was a drummer, first Brad Woodruff, then Jim Kohrig. I was invited to join to the fall of '64, on keyboards, although I had none. I remember playing the piano in Artie's living room.

In due time we started playing at the Wildcat Den teen center, for $40 a night. We had one old brown amplifier through which Artie and Danny both played, one microphone, no P.A. system. I played a piano that was in the teen center, which was in terrible condition. Most of the keys didn't work, and those that did were out of tune. I remember pounding the heck out of the one key that was in tune and loud enough. Jim thought I shouldn't be paid because I wasn't really doing anything. Nevertheless I received my wage. Eventually, I bought a Lowery portable electric organ, the same model as the organist in the Epics. Another band that played at the Den was the Knightbeats. They were older, and we learned a bit from them. Others were the Niks and the Universals. They were all from Centralia.

At first we didn't have a name. One night we asked the crowd to choose between the Vibrations and the Dynamics. >From then on, we were the Vibrations

Jim was a star athlete. After the first year, it became obvious that he couldn't play a football or basketball game and a gig with the band on the same night. Just as obviously, he wasn't going to give up his sports career. Jim resigned from the band by mutual agreement.

1965-66 was a good year for us. We appeared on television-"The Hour" on Channel 3 Harrisburg. We also performed at the SCHS Band Variety Show. Mr. Gum didn't want any leather-soled dancing on his gym floor. We did our number, the instrumental "Taste of Honey," then the MC, Jeff Woodruff, called for another. We did "Little Latin Lupe Lu" and the upperclassmen jumped up and danced.

When the time came, neither Cindy nor Mike were able to give up their other avocations. So we lost our bass player and for a drummer we got Jack Bookhout, who was a bit younger. That summer we made it to the finals of the Illinois State Fair Battle of the Bands.

The Vibrations broke up in the summer of 1967, when Artie and Danny joined the Burgundies, a band which featured some upperclassmen, including Steve Cantrell, Pat Murphy, and Bob Haney. Later in the summer, I was contacted by Jon Covington of Mt. Vernon (third from left in picture), who was interested in forming a new group. I called Artie and Danny and they were fed up with the Burgundies because they never practiced. So Artie and Danny returned. We auditioned drummers and got Brett Hamburg of Centralia (second from left in picture). We chose the name Mouldy Bred.

Mouldy Bred became the first psychedelic band in Southern Illinois. We were the first to play songs by artists such as Jimi Hendrix, The Yardbirds, and Moby Grape. Other bands were influenced by us.

Mouldy Bred broke up after graduation in 1968 when Danny left to join the Timeations, who became Head East.

Danny left Head East just before their first album came out, for family reasons. He has continued as a solo Christian artist, producing one album that I know of.

Artie never joined another band or continued with music at all, to my knowledge.

I played with a number of bands in college that went nowhere. The established bands I played with were The Front Page, Moulin Rouge, and The Backstage Boogie Band. I quit the latter due to impending fatherhood in 1983. I have done a lot of solo work and now play in church.