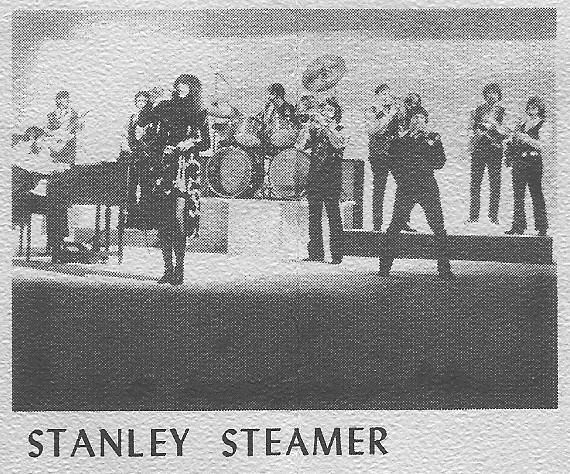 Listen to an MP3 of this GREAT band from the album below:

I got this from Larry Smith on 6/26/10. It's a review of their great, but under-promoted original album from 1973, followed by Larry's poignant comments of it:

Did you ever see this?  A review of the Stanley Steamer album:

"This LP, (never released on CD) was barely released even on vinyl (1973). Talk about signing with the wrong company..!! (Jolly Rogers Records aka: Kenny Rogers) STANLEY STEAMER was a ROCKIN band with hints of dramatic production similar to the before mentioned groups, plus a little hint of Ambrosia & Jesus Christ Superstar thrown in there perhaps even a bit of the Elton John album "Friends" as well. Can you imagine a Band so solid & versatile that It could bring the house down, rock style, then turn on a dime with the sweetest orchestration you ever dreamed of, all with incredibly serious, i venture to say even dark lyrics..?

This band Pivots on the voice of Holly Vaughn. A singer I had never heard of & now wished I had LONG ago. Holly is capable of belting it out Janis style & can breath sweetness in a verse so soft you could cry. It is SO very clear this girl has been singing A LOT before this album was recorded, the professionalism of ALL the musicians on this record is astounding. I blame the fact that nobody knows who this band is on the Jolly Rogers recording company. Because if this band had signed with a better label, we would all know who they are today & there would have been many more albums to their credit. Fortunately for me, I have just digitally re-mixed a copy for my own use. If you find this album, BUY IT. It's even better than the also very scarce vinyl album "SNAIL"."
Funny, isn't it!!  Almost 40 years ago    Almost sounds like an alternate reality...
warren

I am  sending this review of the Stanley Steamer album to my musician friends, musical colleagues, and family members-please read it. I thank Warren Hartman for sending it to me.  It is funny that after 37 years I am just now reading a review of the one and only album that Steamer made.  As many of you may recall, shortly after we finished the album, Kenny was faced with a tough decision-the First Addition was falling apart internally just as they were departing for a world tour, beginning in Japan.  As many of us would have done, he turned his energies to saving his band.  Unfortunately, they went on tour, we went on the back burner.  We had some local and regional success in other parts of the country, but never got the push and air play that we had so desperately hoped for in order to reach the market.  The rest is history.

Having received this review from Warren some 37 years later by a person I don't even know, made me recall the blood, sweat, tears, and pains we as musicians went through to try and "Make it!"  A great deal of credit needs to go to Warren as primary writer and leader of the band-he and we certainly did everything we could to reach our goal.  As I recall the sacrifices we all made, i.e., leaving our families and friends, staying in and playing in some of the "less than desirable" venues/hotels during those early days, sleeping on mattresses with no sheets or anything else in the room that was provided as "part of the contract", late nights playing and up at noon rehearsing for 3-4 hours, eating, and then playing that night, and doing the same thing over and over everyday, just to try and "Make it." While all the time, dreaming that some day we might be able to make it up to those family members and friends we left behind, we continued for years "on the road"-never giving up and always trying, until there was nothing left to give.  So to all those musician friends and beloved family members who stuck by them through the good and bad times, thank you, thank you, thank you.  And to Warren, Holly, Craig, Tony, Denny, Bob, Jim, Fred, and Bobby E. (now in the Rock and Roll Heaven Band) and to Bonnie, who joins Bobby, an even bigger thank you.  Despite the pain and hardships, I wouldn't trade a minute of it, as the passion to make music lives on in all of us!
Sorry if this sounds like a soap opera, but for those of us who have lived it, you know what I mean, and hopefully can appreciate such expressions of the heart.  As Warren so eloquently stated in the album on the cut, "Desperation-I Love You,"
"...ONE, FOUR, FIVE, that's the way to survive.  It's amazing the pain some go through...
...to give more than this, fame and fortune we'll miss,
...but I wonder if they will miss you."
Keep rockin",
Larry

If I would Have Known You Better

And here's some great memories from soundman Doug McCallum:

Don't know what made me think of them, or why I googled the band this evening, but there it is.   I have a small connection to this band.  They came through Lansing, MI, and played at a large dance club here.  I was part of the music scene and went to see bands a lot.  I was a soundman and roadie type.  My previous band had dissolved, and I had no gig.  The Steamer put on a good show.  A fellow named Poo was with them.  He was with Shawnee Sound (or something like that) and had put together a custom sound system for the band.  But they had no roadie and no sound man.   They had only Kenny Wischmeyer running their follow spotlight.  Cut to the chase, I talked to the band and we agreed to meet in Philadelphia a couple days later.  They now had me for sound and roadie work.
Spent the spring and early summer if 1973 in the greater Philadelphia and Jersey Shore area.  We rented a house for the band out in the middle of rural NJ.  We were a block away from a Mrs. Paul's onion ring factory. Smelled good for a week or so, then it got tiresome.  Folks seemed to like us at the shore, and on a couple busy weekend all day gigs in Margate, NJ (on the beach) we got to play with Gary US Bonds, and a couple with The Happenings.   Those groups toured really light, so I wound up doing sound for both groups (different dates)
MY brush with fame:  I talked with Kenny Rogers.  I answered the phone one day and heard, "Hi, this is Kenny Rogers.  Is Warren there?"   "Yes, he is, one moment please."   yeah, well, not much as fame brushing goes...