There was a house band called the (Whirl-a-Way) Twisters

I got this photo and note from Bill Jones:

Hey Greg,  Bill Jones here from Akron, Ohio via Roxana, Illinois.  I was the source for fake IDs when I was in high school.  Most of which were debuted at the front door of the Whirlaway.    Here's my story.  There was a guy from Granite City that had a band that played there the first time I went.  He was a white dude named Herb Sadler;  an outrageous guitarist who had a young colored gal named Doris that sang.  And, boy could she sing.  They used to do a lot of Ike & Tina Turner covers.  After a number of trips to hear them, I was able to get them to play at our 1965 senior class party.    I think it cost us ( the student council of which I was not a member ) around $400.00 for the gig.  It was held in a park pavilion somewhere near Edwardsville.  During the bands break I learned that they, ( Herb and Doris,)  were leaving to go to California to go on tour with Ike Turner.  I bummed a ride from them to L.A.  and then I hitched my way up to San Francisco, found a job, and then the draft board found me.
Thanks to the internet,  I was able to locate them again.  Herb lives in South Roxana and Doris  I think is in St. Louis.  They play gigs around the Alton area still and for a while was one of the bands onboard those Blues Cruise ships.  I got to spend some catch up time with Herb in person a few years back and we call one another fairly regularly.  Fond memories.
I have attached a photo that was taken in the Whirlaway  New Years eve 1965.   I am far left,  can't remember second from left but he was from Wood River,  Gary Little (deceased) Ralph Chavez, whereabouts unknown;  and we have no idea who the chick was. 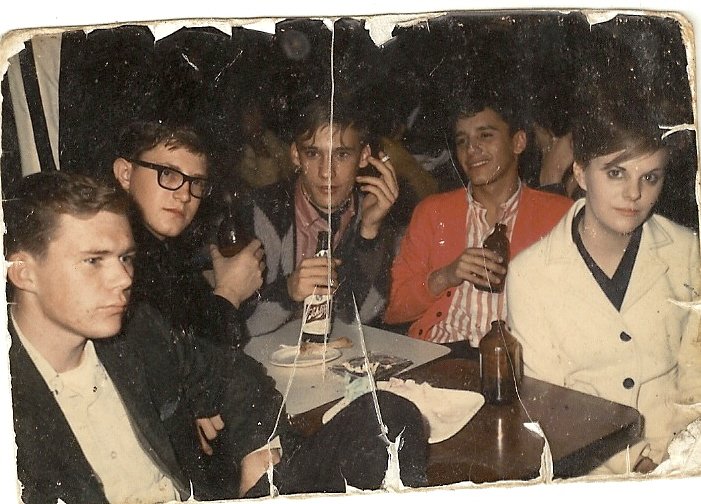 I got this post from Don Babchick, now residing in Florida:

I saw your posting online. I believe the year was 1960, I was a sophomore at U. City in the St. Louis suburbs.  A couple of my friends went to Fairmont park one Saturday night and afterwards one of the older guys lead us to the Club Whirlaway in Belleville if my memory serves me correctly it was right of the Belleville Square. Well got in with no IDs and Johnny “ Twist” Williams was playing and he broke into Mary Well’s Bye Bye Baby which later became the anthem for all U. City parties…. What a great introduction to good bar music at an early age. I am 66 and still attending live music venues all over the country.

...and here are some fantastic recollections from an anonymous writer:

Yep, I used to be a weekend patron (when I had $1.00 for the cover charge and $ .75 for a beer) of the of the Whirl-a-Way back in the day, i.e., late 50’s and early 60’s. In fact the then owner used to live down the street from me. For many years Johnny “The Twist” Williams used to head the house band. On occasion, he brought with him many great R&B folks from ESL. That gave the place a distinct sound. His drummer was a local guy who could carry a solid R&B beat. I believe he is still around and lives in Belleville. Anyway, Johnny Williams had an original ESL sound, so I have been told in later years. I recall the fights that broke out inside the place and were moved outside by the owner. Beer was served in bottles so there was often lots of glass which resulted (I think) in some ER visits. Those that came for the music stayed inside while the gawkers followed the fight outside. Perhaps a bit safer. No guns in those days, just muscles, beer bottles and tire irons. Interestingly, I recall seeing many of those same folks involved in the altercations back the following weekend. It was just that kind of place that drew kids (pardon me, young people) from all socio-economic groups in the area. I can recall meeting college students from WashU and StlU as well as the local farmers, students and factory workers. It was truly a mix of society. A couple of those folks went on to be nightclub owners themselves and yes, judges, attorneys, teachers, et. al.

I attended Wash U in St. Louis in the early 1960's.  Getting girls and an alcoholic drink (order not significant) was always a priority.  Most evenings we hung out at a local joint that featured Johnny "the twist" Williams .  One day he invited us top watch his performance at the Whirl-a-Way in Belleville.  After that we became regulars there, usually making the trip on weekends.  I remember the Whirl-a-Way having good blues, a blindness to age when serving beer, a long trough in the men's room,  and lots of girls that we more often than not struck out with.  "Ah memories, we will cherish them."  Those years ingrained a love of the Blues in me that remains to this day in my 74th year on the planet.  I played guitar, of course.