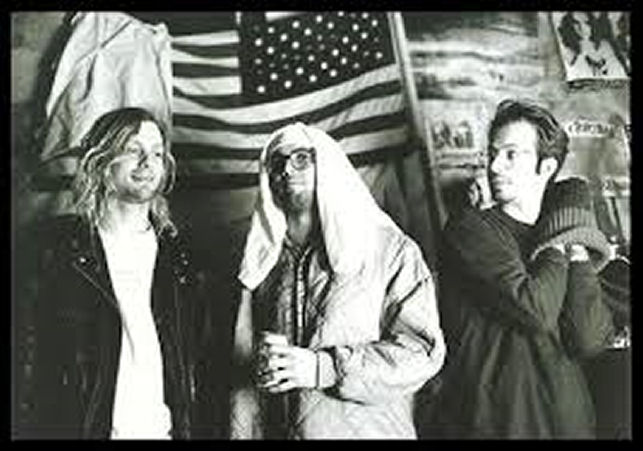 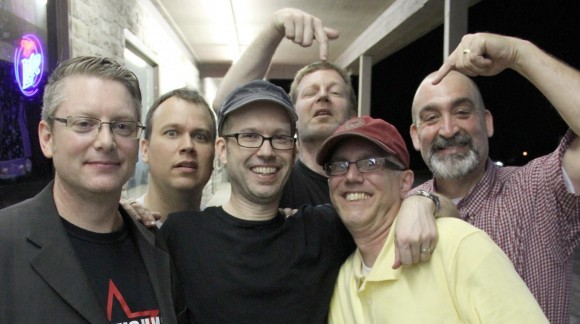 Here's the re-united version of The Felons

Here is Andy's explanation of EVERYTHING:

After meeting in kindergarten class, best friends Andy and Doug started playing music together in 8th grade.  Influenced by Lynyrd Skynyrd, The Clash, 999, Foghat, Stiff Little Fingers, Generation X, AC/DC and The Cars, they were known as CLuB ZeRo and played regularly for most of their junior high and high school weekends.  After the demise of CLuB ZeRo, the two drafted Mark Kanak, followed quickly by Carlos Huddleston to play bass guitar and called themselves, judge nothing.  A few demo cassettes were recorded and the guys were given a taste of life on the road.  This taste was unlike their experiences that they had growing up in the small Midwestern town of Alton, which was also home to the world’s tallest man (Robert Wadlow), the first man to die for “freedom of the press” (Elijah P. Lovejoy) and a lady who killed her children (Paula Simms). This taste quickly grew into an unsatisfied hunger.  Carlos, unwilling to travel in near poverty-like conditions in a hot, smelly van with pink shag carpet which would serve as home for months on end, bowed out gracefully.  Oddly enough, a friend/roadie/fan/fellow purveyor of malt beverages named Flea was drafted to fill the role of bass player.  With shoeboxes full of demo tapes, boxes and boxes of t-shirts and a cooler full of Gatorade, peanut butter, jelly and sardines, the touring machine was ready to roll.  After touring most of the country’s best and worst clubs and dives, and opening up for some of the country’s best and worst bands, the machine was finely honed and the guys were ready to make it “official” by signing to Chicago’s cool indie label, Thick Records.  Amid their busy tour schedules and road adventures, the guys were able to hunker down in a studio in Chicago to record, “I’m A Big Girl Now” in 1995 followed by “Riveter” which was recorded in 1996 in Ft. Collins, Colorado at The Blasting Room, the studio owned and operated by our friends Bill Stevenson, Jason Livermore and Stephen Egerton from The Descendents and ALL, who also produced the album.  In 1997, after the “Northern Near-Death, Black Ice Everywhere” tour, the guys threw in the towel, eerily near the location of Buddy Holly’s plane crash.  It truly was the day the music died.

“I’m a Big Girl Now” CD 1995 as a European Import with Revolver Records.

“A Cheese Sampler” 1990 self released cassette.

“judge nothing” 1988 self released cassette.

Thick Records, 1996, with “score uneven” and “flowers on the wall” and ALL w/ “ruby”.  (This guy is a rarity, popping up on e-bay every once in a while, and really great artwork by famous skate artist, coop.)

doug nothing aka doug raffety-guitar and vocals. 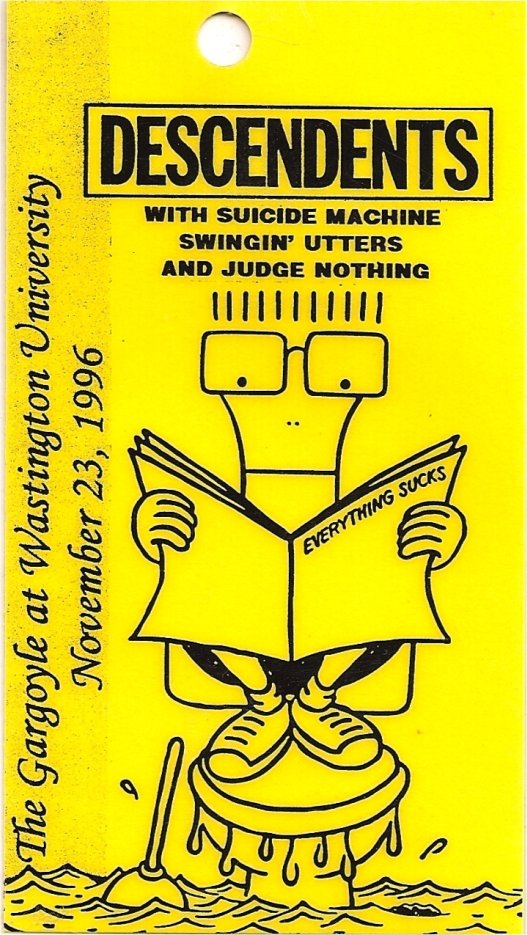 Favorite afternoon off (andy)…Tony’s ocean potty adventure with guest appearances of a dog and dead seagull on a beach in Texas.

Favorite T.V. show…Dawson’s Creek, although we have never watched it, we still get ASCAP checks for our songs being on it, thanks to re-runs in Denmark.

Ranked in Top 50 of over 40 college radio stations with “Riveter.”

Favorite Microbrewery who let us sleep at their facility…Bristol Brewery in Colorado Springs, Colorado.  (“just like Willy Wonka”)

Favorite afternoon off (flea)…bodysurfing off the coast of Tybee Island complete with afternoon cocktails, tanned poopers and a variety of battle scars.

Best reviewer quote…”judge nothing is the Badfinger of punk.”

Favorite early morning wake-up…blasting bagpipes played by member of Beef Curtains after a late night with 311 in Omaha.  (Flea slept through this one).

observed, en route to gig in Indiana.  (Flea slept through this entire adventure too).

Favorite famous “hook-up”…Billy Corgan and MTV’s Tabitha Soren meeting at our show with Evil Stig (Joan Jett & the Gits) at the Double Door in Chicago.

Favorite afternoon off (doug)…a trip to a winery in hills of West Virginia to drink wine with the owner and smoke a very large Winston Churchill, topped off by shaving Flea’s head back at the hotel.

Quickest departure from radio show performance…the exit of above show due to intense “noxious sumo fumes” released as result of martini and coffee consumption.

Favorite songwriting adventure…gig cancelled in Memphis; so, we played in the basement of some “straight edge” kids’ home, spilled beer in their living room, slept on their porch and wrote “Memphis.”  On same tour, Green Day coined the term “dookie soufflé” and used it on their next album.

Favorite night off…on tour with Joan Jett.  The Blackhearts and us stormed the stage of the geriatric, cheesy, hotel house band and jammed through several cover tunes with andy on drums, doug on guitar, Thommy Price on vocals and Kenny Aronson on bass.  Did Flea sleep through this?